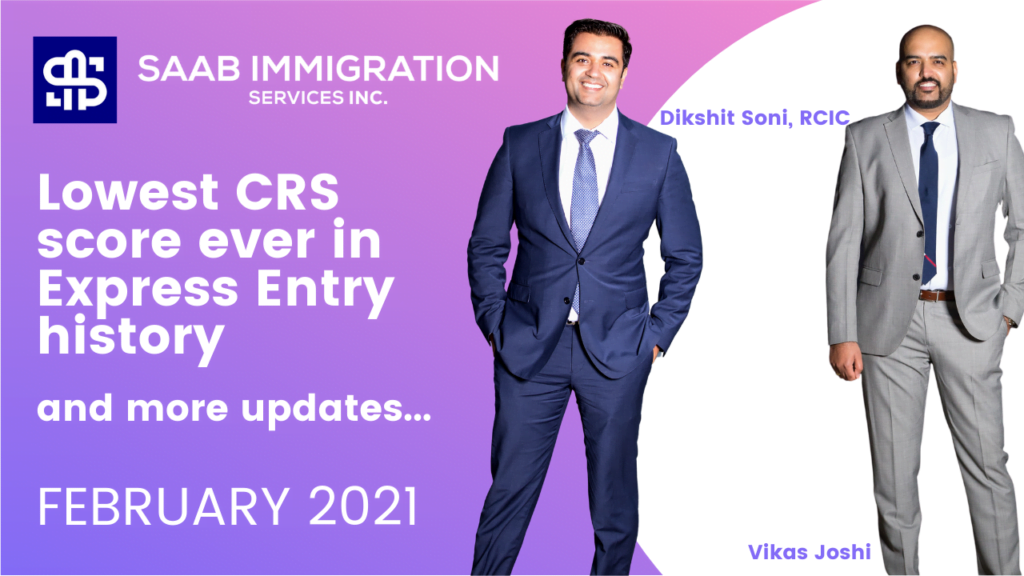 Immigration Refugee and Citizenship Canada (IRCC) announced a landmark low CRS cut-off of a mere 75 points on Saturday. With this draw 27,332 Invitations to Apply (ITAs) have been issued to candidates under The Canadian Experience Class (CEC).

As the name suggests CEC consists of those applicants who have gained at least 1 year of skilled work experience in Canada within the 3 years prior to applying. Additionally the applicant must have completed at least 1560 hours of work i.e. similar to 30 hrs per week for 12 months in a NOC 0, A or B job and this job must have been performed while working with authorization. Most candidates who fall in this category are currently residing within Canada.

Why did IRCC take this step?

IRCC launched Express Entry on 1st January, 2015 and in the 6+ years history of this program never before has a cut-off this low been announced. There could be a multiple reasons why IRCC came out with this decision and we cannot accurately state why the cut off was so low but a calculated guess would be The On-Going impact of COVID-19 on Canadian Immigration. Even last year in March when the Lockdowns were first announced, we saw IRCC make adjustments to their Express Entry Draws by introducing CEC & PNP specific draws as their monthly staples whereas prior to March, 2020 draws each month had majorly been without any program being specified.

With the world still reeling under the pressures of COVID-19 and with different parts of the world being in different stages of lockdowns, various Canadian Immigration programs are not being able to function normally. By sending out invites to more than 5 times the number of candidates that normally get ITAs through a draw, Canada should be able to stay on course to achieve their current immigration needs by offering Permanent Residence (PR) to those foreign nationals who are already within Canada on a Temporary Residence status. IRCC has already announced an ambitious plan of offering Permanent Residence to more than 400,000 immigrants in 2021 alone and this draw goes to prove that IRCC is taking steps to meet their commitments for the year.

What does this mean for applicants who were currently not in the pool?

There are probably hundreds, if not thousands, of applicants who could have been eligible with a 75+ CRS score but had not already created their profiles for Express Entry because the previous draws saw much higher cut-offs. Such candidates would, unfortunately, not get invites under the current CEC draw. There could also be a large number of candidates who could soon become eligible prior to the next CEC draw because the minimum requirement of 1560 hours of work experience is going to be completed in the coming weeks.

Since March 2020 we’ve seen 13 CEC draws being announced and 3 of these draws were in the first 45 days of 2021. This should lead us to believe that we should see at least 1 or 2 more draws happening before March end but we must also not forget that more than 27000 applicants have been issued ITAs and a lot of them would be submitting their applications. The Visa officers are going to have their hands full processing these files so it’s also likely that IRCC may chose to delay further draws to help process existing backlogs.

We cannot accurately predict when the next CEC draw would be announced but if all Immigration aspirants could take one learning from this draw then it should be to have their profiles in the pool irrespective of what scores they are likely to get. Through this draw any applicant who met the minimum criteria under this program, which is virtually any and everybody under the CEC class, would be rejoicing beyond everyone’s expectations.

What does this mean for applicants who were already in the pool?

This draw basically means that the floodgates have been opened and every eligible applicant who had already completed the Expression of Interest (EOI) would have received the ITA. Such candidates should now have 60 calendar days to respond to the ITA. These applicants should now be working on the document checklists, filling out the required forms, arranging for supporting documents and organizing all the required paperwork to complete the application process. Remember to #DoItOnceDoItRight reach out to SAAB Immigration Services, a full service immigration firm with a team of Regulated Canadian Immigration Consultants (RCIC) having expertise in processing such applications.